Art by Carol May
The Joy of Painting
Menu

The rule of thirds is a shortcut for easy composition.

It is an easy, tried and true method of composition for both photographers and artists. It's been used for centuries.

It makes composition super easy for the beginning artist. It gives the budding artist breathing room. They can concentrate on mixing colors and other skills without being so concerned about composition.

when did the rule of thirds start?

Way back in 1783, Thomas Smith wrote about balancing light and darks in our paintings. Fourteen years later in 1797, Joshua Reynolds quoted Smith and expanded on his ideas and called it the rule of thirds.

He talked about having unequal parts in a painting. Such as, one third land with two thirds sky, two parts land to one part water, etc.

He said to not put equal parts of anything in a painting, light, darks, shapes, color or anything. Instead have things in a 2:1 proportion.

it's easy to use the rule of thirds!

Today the rule of thirds is used often to compose paintings.

Place lines horizontally and vertically at one third and two thirds. This divides the painting surface into nine equal parts.

The main subject of the painting is placed at or near one of the intersections of the lines (See the tree below.) 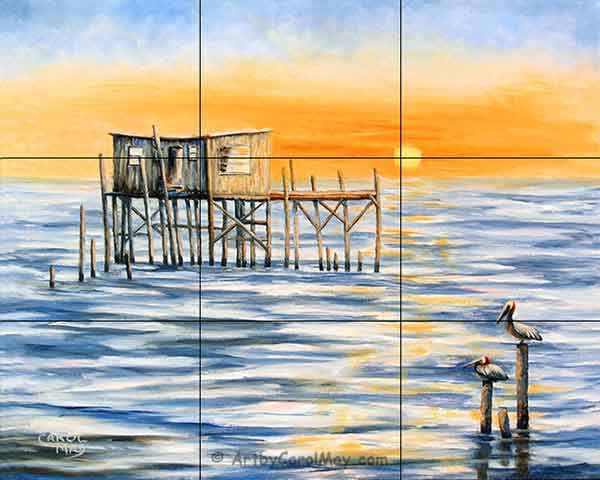 The rule of thirds creates a balanced composition.
Image by Bessi

Horizon lines of land or water are placed at or near one of the third lines. That gives us the 2:1 ratio of land to sky and land to water. That's what Joshua Reynolds was talking about in his writings back in the 1700s. This method has been around for a long time.

Vertical subjects such as a tall waterfall or a tall building could be placed near one of the vertical divisions.

A secondary focal point may be placed at another intersection of the lines. In the photo above you see the bright light near the bottom left intersection.

A more dynamic painting would be created by having the secondary focal point at a diagonal intersection, instead of the one directly across.

why do we use the rule of thirds?

Only man makes things in balance in our buildings, formal landscapes, etc. They have their place and can be attractive, but not so much in paintings.

There are times we may place the focal point directly in the middle of the painting. One example would be in a portrait. Do not have the subject looking directly at the viewer. It is best to place them in a three quarters view.

There is a disadvantage of placing the subject in the center. The viewer's eye is drawn to the subject, then they don't look around the rest of the painting.

In a landscape painting, if the horizon is placed in the middle of the painting, it cuts the painting right in half. The viewer feels discontentment and moves on to look at other paintings.

the rule of thirds is a shortcut for good composition

Place the focal point at or near one of the intersections. This creates an attractive, balanced painting. Things are not equal, but they are still in balance.

Think of a teeter tooter.

The heavy person sits on the short end of the teeter tooter. Just like the subject of the painting is only one third of the way into the painting.

The lighter person sits way out on a longer side of the teeter tooter to balance the heavy person. The other parts of our painting take up two thirds of the space, so they are in balance with the heavier side.

A painting with unequal parts is more interesting and attractive the viewers. The focal point draws the people in. Then their eyes move around looking at the other parts of the painting.

We paint for the viewers and the rule of thirds makes it easy.

Of course not! But, it is an excellent tool for the artist's tool belt.