Art by Carol May
Express Yourself with a Painting
Menu

Photos, information and identification tips of the common types of hummingbirds in the United States.

Most hummingbird types visit here during the summer months and then go south for the winter.

Some Anna's and Allen's Hummingbirds live all year on the west coast. The amazing Rufous Hummingbird (pictured below) migrates up to 2,000 miles every year. 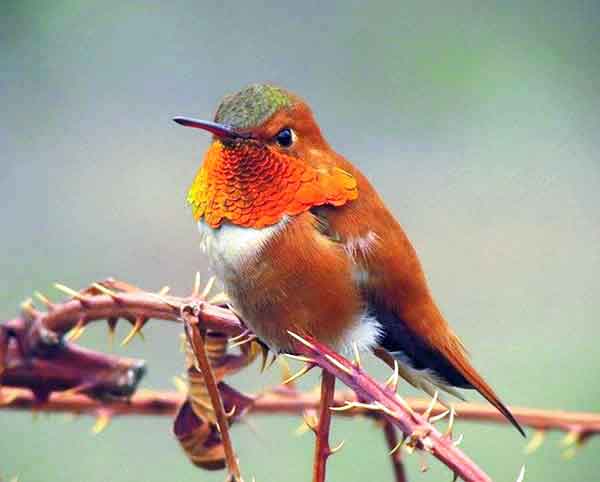 What types of hummingbird do we see?

The Ruby-throated Hummingbird is the most well-known of all the hummingbirds. Ruby-throats populate the entire eastern half of the United States during the warm months of the year.

In fact they are the only type of hummingbirds seen in the east. They range from the gulf coast all the way up into south Canada.

They bless us with their beauty and energy during the summer months. Then each fall they fly across the Caribbean to Mexico or Central America for the winter. A few spend the winter in south Florida. 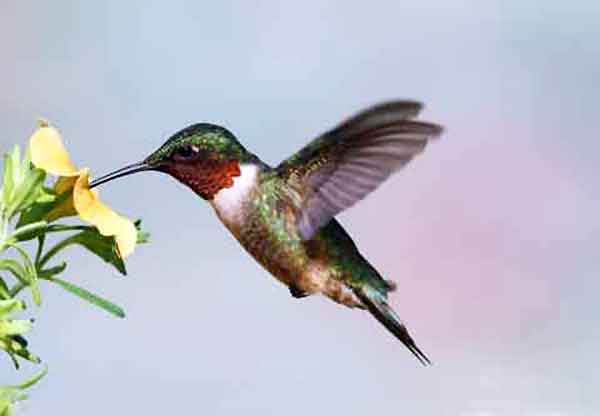 The top of his head, sides and back, also have iridescent feathers that glisten green in the sunlight. Without direct sunlight his colors looks dark.

His primary wing feathers and tail are dark. There is a notch in the center of his tail. The beak and legs are dark.

Just below his ruby throat, the top part of his chest is white before a light-colored belly. 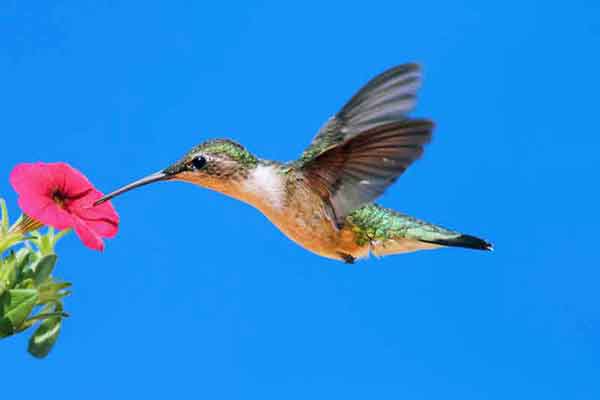 Her head and back are iridescent green like the males. Her tail, large wing feathers, beak and legs are also dark.

Her tail is not notched, but the tips of her tail feathers are white on the outside corners. 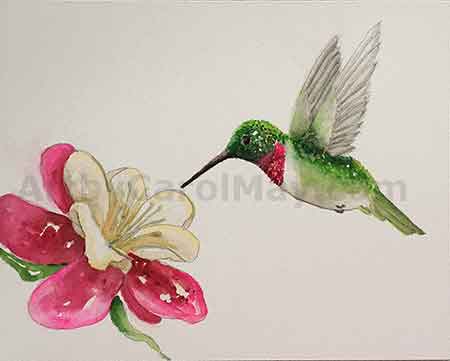 You can paint this hummingbird.

Paint this hummingbird with watercolor paints.

See the step-by-step instructions for painting this hummingbird.

Watercolor is an easy painting medium for the budding artists.

Paint this Ruby-throated Hummingbird checking out a Fuchsia flower.

where do the the ruby-throats nest?

She spends 6 to 10 days building a nest. The nest will roughly be the size of a ping pong ball. The male does not help with any nest building or baby care. 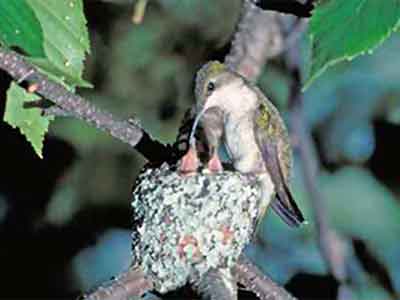 The tiny birds are naked and blind when they hatch. Mom feeds them regurgitated insects and spiders mixed with nectar.

They grow fast and after three weeks they will start exercising their wings on the side of the nest. After they leave the nest mom will continue to feed them for a few days until they are able to find food on their own.

But before they grow their entire set of feathers, you can see their white fuzzy bottoms, identifying them as youngsters.

In the fall, August to September depending on exactly where they live, the adults head south for the winter.

Then in the spring March to April, they all fly back to the same area they left in the fall. They remember where the feeders and flowers were from last year.

These tiny jewels certainly are one of God’s amazing gifts. What other types of hummingbirds do we see here in North America?

Stay up to date with the latest painting tips, techniques and news. 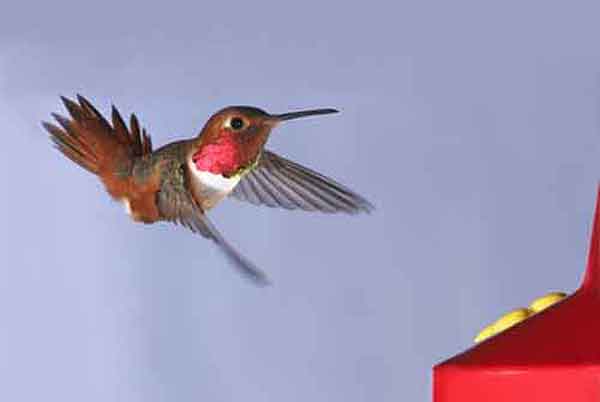 Allen's Hummingbird is one of the types of hummingbirds that are full-time residents in the United States. It lives all year in California. It frequents the coastal foothills.

They look very similar to the Rufous Hummingbird. But the Rufous has a rust colored back and the Allen's has a metallic green back and head.

It has rufous colored sides and a copper-red throat on the male. It has a dark forked tail. 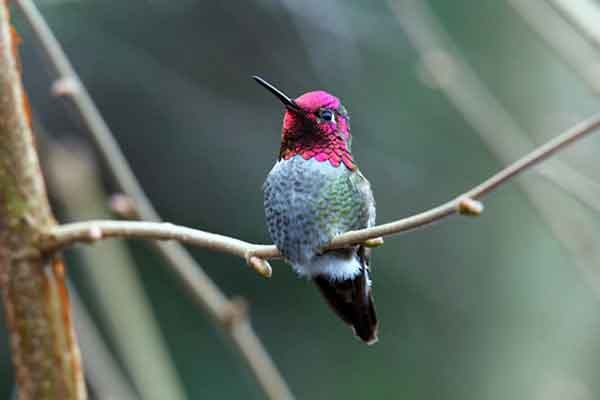 Male Anna’s Hummingbirds have a flared rose colored gorget, and the same color on his head. This coloring distinguishes it from the Ruby-throated which has only a red colored gorget with a green head.

It is slightly larger than the Ruby-throat and has a bulkier looking body.

The Anna's Hummingbird is a full-time resident in the United States. It is found on the west coast of the United States from Canada to Mexico. In the winter it may range across the southern edge of Arizona to west Texas.

It lives in the lowland gardens and the mountains in the summer. In the winter it moves to the deserts. It often nests in Oak Trees.

Anna’s is one of the types of hummingbirds that like a perch on their feeders, so they can sit to eat. 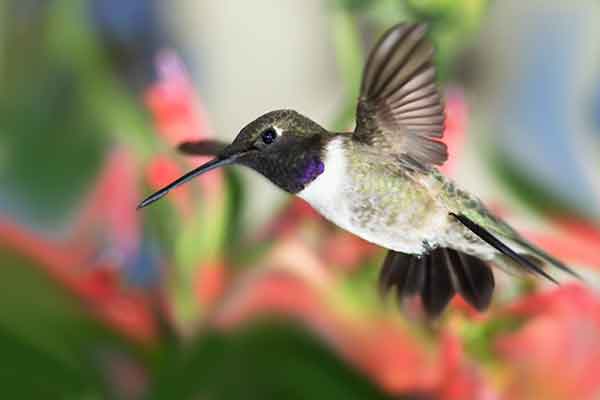 These two types of hummingbirds are similar in appearance except instead of a ruby-throat the males have a black chin and their throat is a beautiful violet.

Their tail is notched and their bill is slightly down curved. The top of their head, back and sides are greenish.

The females also have greenish backs and heads with white chins and under parts. They may have fine specks on their throat. Other than her down curved bill she looks very much like a female Ruby-throat. Her wings are a little bit longer.

They reside from western Montana and Texas to California, including New Mexico and Arizona.

The female builds her nest by herself in trees or large shrubs often in the fork of small limbs. The nest is only about 1 ½” in diameter. She lays 2 eggs that hatch in about 16 days.

When the babies have feathers the mother will often build another nest within sight of the first nest to raise a second set of babies.

What a hard worker, she does it all by herself. But, it is great for keeping the species going. 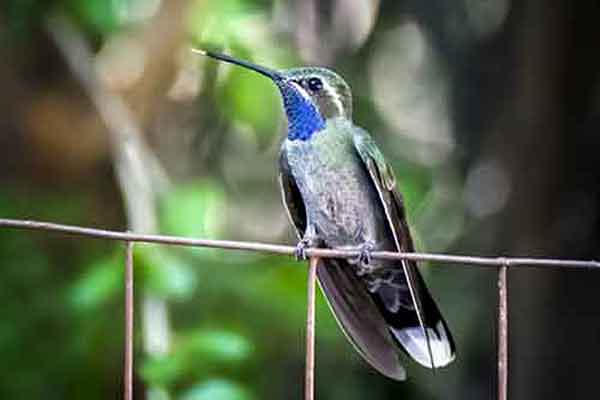 Our other hummingbird types are in the 3 to 4 inch range.

Bother male and female have two white stripes on their face. It has one eyebrow stripe above the eye.  And a smaller, whisker white stripe below the eye.

It has a large blackish colored tail with white corner. The male has a blue throat. Its belly is grey.

It is seen in Arizona, New Mexico, Texas and sometimes Colorado. 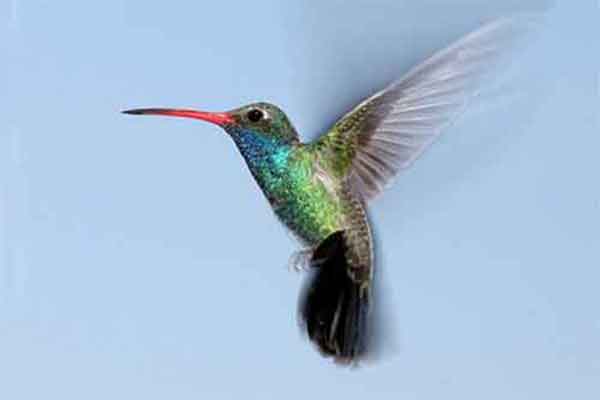 It is one of the types of hummingbirds that come into the United States through Mexico.

Many hummers have dark bills, but the Broad-bill has a red bill with a dark tip.

The male has a dark metallic green body, but in poor light it will look black. His throat is a beautiful blue.

The female is green above with light gray under parts.

You can paint this hummingbird. 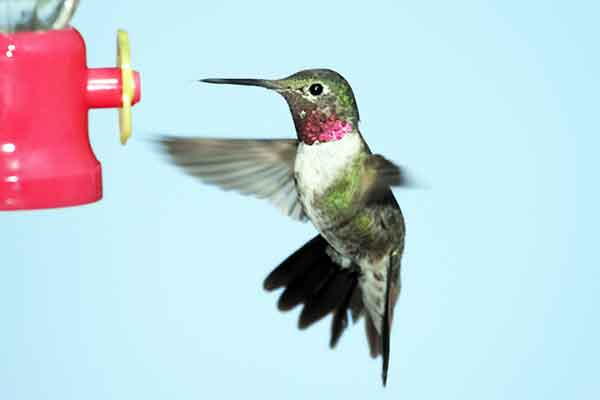 Broad-tailed Hummingbirds breed in the United States from California to Wyoming and south to Arizona, New Mexico and Texas.

It is frequently seen in the Rocky Mountains and it nests at high altitudes. Some stay the year round in southern Arizona, Texas and some areas of the Gulf Coast.

It looks very similar to the Ruby-throated Hummingbird, but they live in different parts of the country, so there is no confusion.

Its crown and back are a dark green. Its sides are greenish. Its broad tail is also greenish. The male has a rose-red throat.

The female has cinnamon on her sides and some spots on her throat.

The male's wings make a loud trilling sound when he is flying; this sound is not heard in other types of hummingbirds. 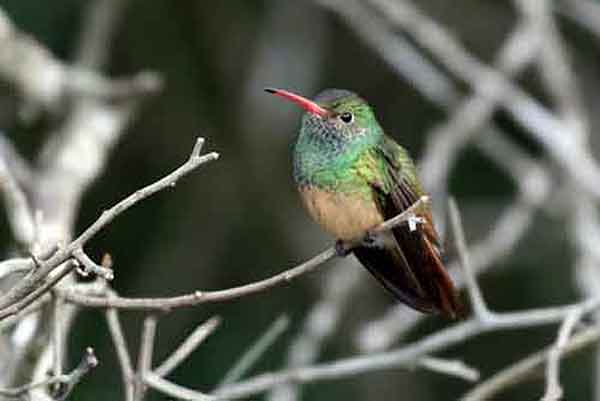 It commonalty nests in south Texas. A few stay the winter in Texas.

They have a red bill that is black on the end.

Its head, back and upper chest is green. Its belly for which it was named is buff colored.

It has a rufous colored, forked tail.

The male and females look similar.

How many types of hummingbirds are there? 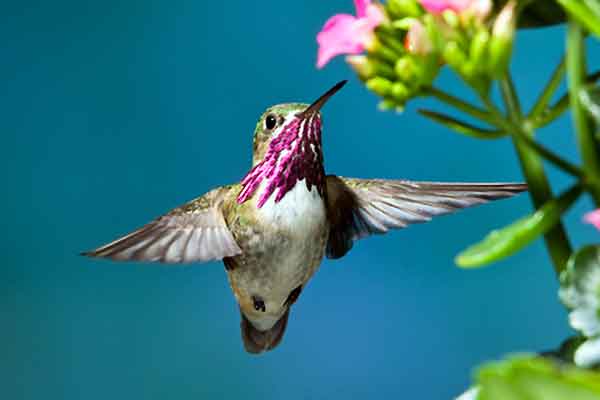 Calliope Hummingbirds are seen in sub-alpine forests, especially near streams of southern Alberta and British Columbia.

They are fairly numerous in British Columbia through Montana, Idaho, Washington, Wyoming, Nevada or eastern California.

They however are not seen in the coastal areas, except sometimes on the coast of western Texas, Arizona, and New Mexico.

They have a shorter bill than some other types of hummingbirds.

They have long reddish purple feathers on their gorget which they are able to flare out. Their white neck shows in between the long gorget feather. 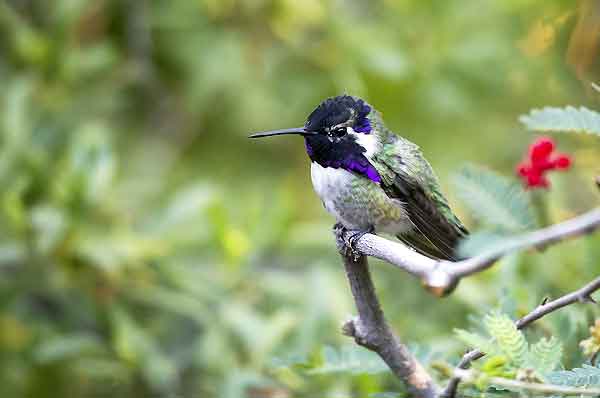 The Costa's Hummingbird has similar coloring to the violet throat of the Black-chinned.

However the blue-violet gorget of the Costa is flared and his head is the same violet color.

This type of hummingbird is found in desert areas of Nevada, Arizona, and California.

They prefer the dry desert areas and build their nests far from water.

They often build their nests in cacti and yuccas. 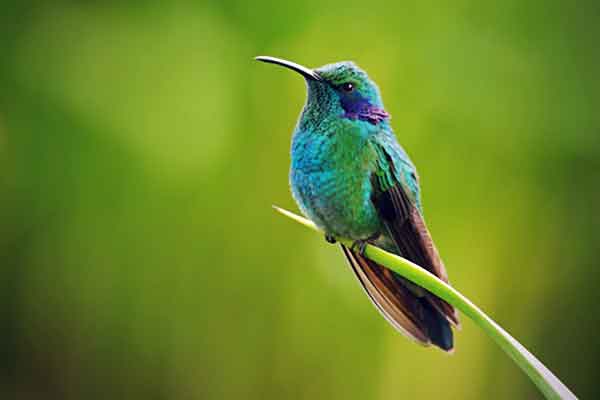 The Green Violet-ear Hummingbird is one of the types of hummingbirds that is seen less frequently in the United States. It visits Texas and it has been seen in Alabama.

Both male and females look similar. Their entire bodies are a beautiful iridescent green, God's gifts of flying jewels.

It has a purple-blue patch by its ear and a similar colored patch in the center of its chest.

It has a bluish-green tail. Their bill is slightly down-curved.

It is known to be aggressive and chases other hummingbirds. 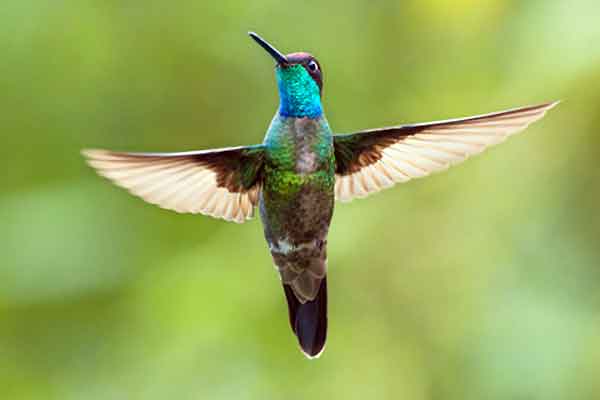 Magnificent Hummingbirds, along with the Blue-throated Hummingbird are the largest types of hummingbirds in the United States.

They both have blue throats. However the Magnificent's throat is more blue-green. Its crown is purple and mostly dark looking.

The female has grayish underparts.

Male and female both have a bright white stripe behind their eye, a long bill and a long tail.

They are seen fairly regularly in Arizona, New Mexico and Texas. They breed in these areas. A few have been seen in Utah and Nevada at higher elevations. Some overwinter in Arizona. 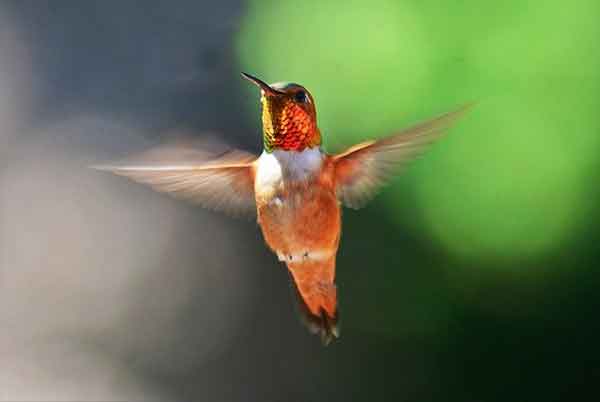 Rufous Hummingbirds true to their name are rufous (a rusty orange color). The male has a bright orange-red gorget. His back, tail and sides are rufous color. They may have some green flecks on their head and back.

The female has rusty color on her sides and under her tail. She has small red to green-gold spots on her throat.

The Rufous Hummingbird is easy to identify because their rusty, rufous color is lacking in most other types of hummingbirds.

You can hear them talking with a loud chirp and chatter when they come to your feeder. They are one of the noisy types of hummingbirds.

They are fairly numerous from Alaska to Mexico and in between. They live from the mountains to the lowlands. Some may winter on the gulf coast. A few have been sighted farther east late in the season.

Hummingbird migration facts are amazing; Rufous migrate up to 2,000 miles. 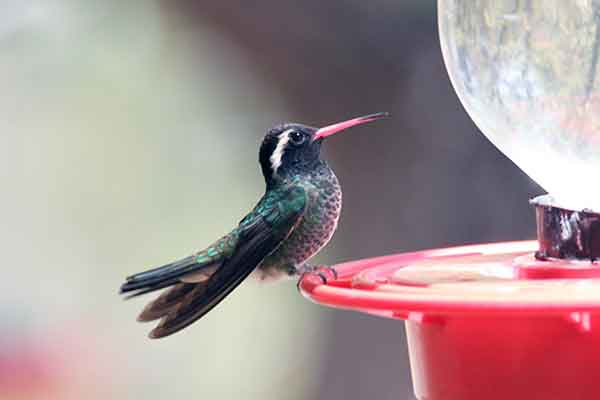 White-eared Hummingbirds are a less frequent visitor to the United States.

It lives in Mexico and South America, but sometimes comes to southern Arizona and New Mexico and is seen breeding and nesting there. It is rarely seen in west Texas.

Their red bill has a black tip.

Both male and female have a white stripe behind the eye.

The male has purplish on its head and chin and a green gorget. The female has greenish spots on her throat. 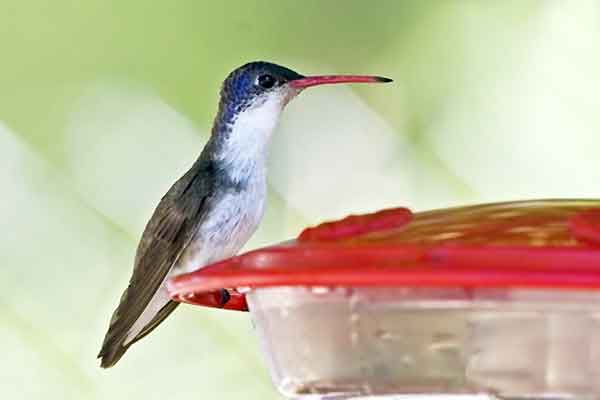 Violet-crowned Hummingbirds visit and breed in Arizona and New Mexico. They favor sycamore trees and canyons at low to middle elevations. They often nest near water.

A few have been seen in Southern California. And some have overwintered in Arizona.

The male and females look very similar. They have a red bill with a black tip.

They have a striking white throat and a light colored belly. The top of their head is a violet-blue. 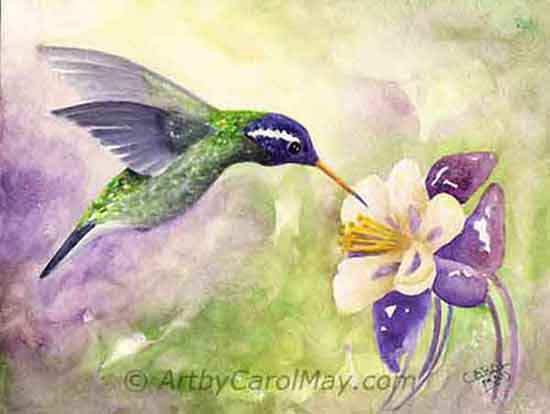 Flowers for the hummingbirds will bring the hungry hummers to your garden. Red is their favorite color.

You are sure to see at least one of these types of hummingbirds where you live. Feed the hungry hummers and you will have this beautiful gift of God coming to your yard!

Painting is joy to the heart!